Requested address is a broadcast address but flag is not set

Some RemoteSign Windows users have reported getting a message when RemoteSign starts up saying:
"Requested address is a broadcast address but flag is not set"
I also saw this on 2020-10-04 and rebooting my machine resolved the issue. If that does resolve the issue for you, try setting a different port by editing the port number in RemoteSign.ini
Try something between 50603 and 65000 instead of 50601.
Version 2.9.15 or higher will prompt you for a new port number and save it for you!
Any software connecting to RemoteSign on that machine should also connect on the new port number. For example: 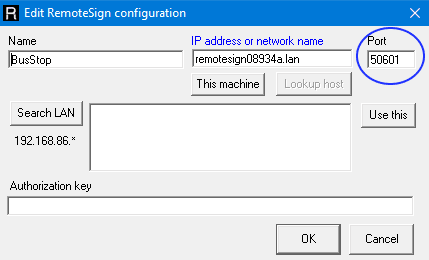 I suspect that some other software has started using port 50601 which RemoteSign uses by default.

Only one sound plays and RealPlayer was launching

Solution, in Windows control panel, open the Sounds icon and go to the Audio tab. Check the checkbox called "Use only default devices"

It seems that sound playback had been set to use RealPLayer and RealPLayer was only handling one sound at a time.

Running under Windows 8 and above

If you are having problems launching RemoteSign do this:


Back to User manual