RemoteSign Sequencer is a very powerful scripting tool that allows you to control a single RemoteSign or multiple RemoteSigns simultaneously. 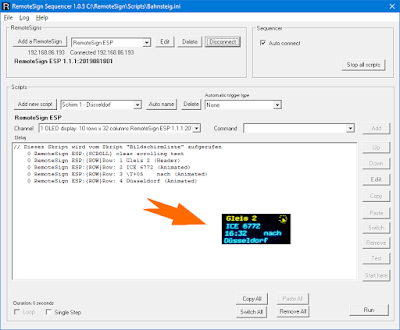 A script is a list of commands to be carried out in a sequence. RemoteSign Sequencer lets you create such scripts, and run them, thus controlling whatever RemoteSigns you wish.

It can be downloaded and installed as part of the RemoteSign installation.
If you already have it installed, and want to pick up the latest version, run the Fetcher program in the same folder, and select Sequencer.exe, and click 'Fetch'

If writing scripts is not part of your skillset, we offer a scripting service

How to use the ESP8266 RemoteSign ESP loading facility.

Changes over time can be found here