RemoteSign Relay is a tiny (20k) helper program that enables any Windows program that can launch an external program to trigger any script in RemoteSign Sequencer.

RSRelay.exe is a file that is installed along with RemoteSign. (If you have a version installed before 2020-05-09, you can use Fetcher to download it, or simply install RemoteSign again.)

Here is an example that illustrates how it works:

When your software launches RSRelay, it will connect to RemoteSign Sequencer and pass the script name "Track3" to it, then terminate. RemoteSign Sequencer will then look for a script by that name and run it if present. That script can be long, include delays, and talk to multiple RemoteSigns of all types.

RSRelay has no user interface and returns an exit code indicating success (in transferring it to Sequencer) or an error code.

Here is an overview of possible information flow from some layout software to the RemoteSigns.

You can also create Windows desktop shortcuts to RSRelay.exe with the script names you want to trigger like this: 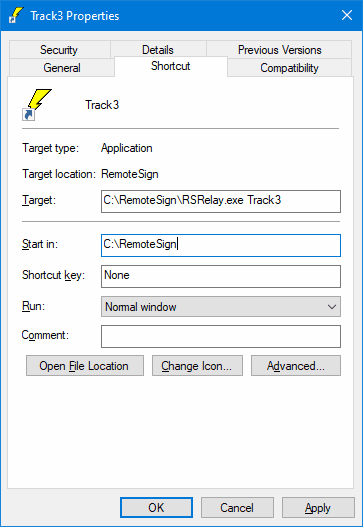 RSRelay will always produce a return code to indicate how things went. These return codes can be ignored or they can be used to report a problem to the user if the software can handle return codes.

Here are the return codes:


A quick way to see the return code is to create a batch file as follows:

The advantages of this approach are: